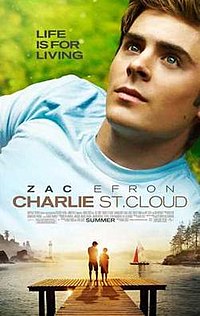 Charlie St. Cloud is a 2010 American drama film based on Ben Sherwood's novel The Death and Life of Charlie St. Cloud, published in 2004 by Bantam Books. The film is directed by Burr Steers and stars Zac Efron and Amanda Crew. The story is of Charlie St. Cloud's choice between keeping a promise he made to his brother, who died in a car accident, or going after the girl he loves. In some markets the film used the complete title of the book.

Charlie St. Cloud is a sailor who wins a boating race on his sailboat, the Splendid Splinter, along with his younger brother Sam. In 2005, he receives a sailing scholarship to Stanford University. Charlie graduates from Winslow High School and after returning from his graduation ceremony, Charlie promises Sam that they will practice baseball every day until he leaves for Stanford. That night Charlie is supposed to go to a graduation party with his friends, but his mother makes him babysit Sam while she picks up another shift at her job.