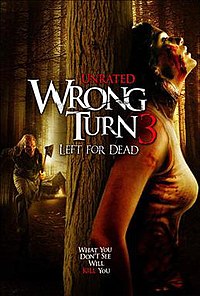 Wrong Turn 3: Left for Dead is a 2009 American slasher film directed by Declan O'Brien and starring Tom Frederic, Janet Montgomery, and Tamer Hassan. It is a sequel to Wrong Turn 2: Dead End (2007) and the third installment in the Wrong Turn franchise. The film was released on DVD on October 20, 2009.

Four college students – Alex, Brent, Sophie and Trey – go into the forests of West Virginia on a rafting trip. As they are camping by the riverside, Three Finger appears and murders the teens, except Alex who escapes after witnessing her friends' deaths.