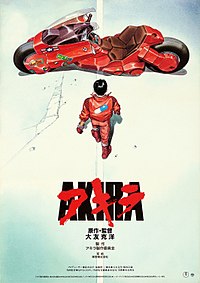 is a 1988 Japanese animated cyberpunk action film directed by Katsuhiro Otomo, produced by Ryōhei Suzuki and Shunzō Katō, and written by Otomo and Izo Hashimoto, based on Otomo's 1982 manga of the same name. Set in a dystopian 2019, it tells the story of Shōtarō Kaneda, a leader of a biker gang whose childhood friend, Tetsuo Shima, acquires incredible telekinetic abilities after a motorcycle accident, eventually threatening an entire military complex amid chaos and rebellion in the sprawling futuristic metropolis of Neo-Tokyo.

In 2019, following a world war triggered by the sudden destruction of Tokyo on July 16, 1988, Neo-Tokyo is plagued by corruption, anti-government protests, terrorism, and gang violence. During a violent rally, the hot-headed Shōtarō Kaneda leads his vigilante bōsōzoku gang, the Capsules, against the rival Clown gang. Kaneda's best friend, Tetsuo Shima, inadvertently crashes his motorcycle into Takashi, an esper who escaped from a government laboratory with the aid of a resistance organization. Assisted by fellow esper Masaru, Japan Self-Defense Forces Colonel Shikishima recaptures Takashi, has Tetsuo hospitalized, and arrests the Capsules. While being interrogated by the police, Kaneda meets Kei, an activist within the resistance movement, and tricks the authorities into releasing her with his gang.