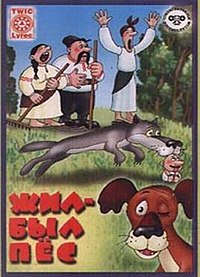 Once Upon a Dog (Once Upon a Time There Lived a Dog, (Zhil-byl pyos)) is an acclaimed Soviet animated cartoon, adapted from a Ukrainian folk tale.

The day comes when an old watchdog becomes useless but the masters, being kind, decide not to drive him away. However, they become exasperated when the Dog is indifferent during a burglary. The Dog is kicked out and goes to the forest, where he meets the Wolf, his old enemy. The Dog and the Wolf are both old, so they understand they can't be just enemies. The Wolf stages a kidnapping to help his mate and the Dog "rescues" the child. The Dog is welcomed back to the khutor (the farmstead) and continues with his old duty. The winter comes and one evening the Dog hears the howl of the Wolf. The Dog remembers to repay the Wolf's kindness. He helps the Wolf to enter the house where there is a wedding in progress and takes him different kinds of food from the table. Becoming tipsy from the effects of a large meal, alcohol and a warm house, the Wolf starts to howl his "song". He howls and the Dog has to cast the mate away from the house. The Wolf thanks the Dog and the best friends bid farewell.