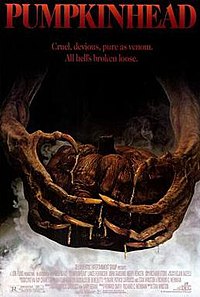 Pumpkinhead is a 1988 American horror film. It was the directorial debut of special effects artist Stan Winston. The film has built up a cult following since its release. The first in the Pumpkinhead franchise, it was followed by a direct-to-video sequel, two TV film sequels, and a comic book series. The film was originally called Vengeance: The Demon and it was inspired by a poem written by poet Ed Justin. The film inspired a video game called Bloodwings: Pumpkinhead's revenge.

In 1957, Tom Harley waits inside his farm cabin with his wife and his son, Ed. A doomed man seeks sanctuary at Tom's cabin, but Tom refuses and threatens to shoot him if he does not leave. Watching through a window, Ed witnesses the man caught and killed by a monster.