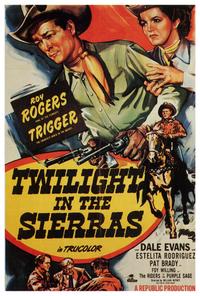 Twilight in the Sierras 1950

Twilight in the Sierras is a 1950 American Trucolor Western film directed by William Witney and starring Roy Rogers and his horse Trigger (billed in the film's opening credits as "The Smartest Horse in the Movies"), along with Dale Evans, Estelita Rodriguez, and Pat Brady.

Ricardo Chavez is a convicted counterfeiter, who after serving time in a California prison, is released on parole to work on a ranch as he begins his new law-abiding life. The reformed criminal, however, is soon abducted by a gang of outlaws and blackmailed to engrave printing plates to make counterfeit currency for Matt Brunner. Brunner is secretly the gang's leader but presents himself in public as only the owner of a Morongo Valley hunting lodge. Although Ricardo now wants to pursue an honest life and forget his criminal past, Brunner threatens to harm or kill his sister Lola if he refuses to do the illegal work. Roy Rogers is Ricardo's parole officer; and with the help of Pat Callahan, a female deputy sheriff (Dale Evans), Roy uncovers the counterfeiting operation while clearing himself of a false murder charge, saves Ricardo and Lola, and defeats the gang.