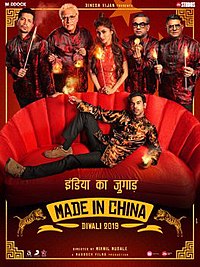 Made In China is a 2019 Indian Hindi-language comedy film directed by Mikhil Musale, director of National Award winning Gujarati film Wrong Side Raju. Produced by Dinesh Vijan under Maddock Films, the film stars Rajkummar Rao, Mouni Roy, Boman Irani, and explores the story of a Gujarati businessman, played by Rao, who goes to China to increase his business prospects. The film is based on the novel of the same name by Parinda Joshi.

Raghu Mehta, a Gujarati entrepreneur, struggles to come up with a profitable business, having dabbled in all sorts of business ideas. Upon being chidden by his Father-in-law, he goes with his brother-in-law to China to discover a new business idea. He lands in a meeting with a Chinese businessman who introduces him to the Chinese version of Viagra, and tells him it will succeed in India because Indians are always thinking about sex. Raghu heads to India and tries to raise funds for his product. Upon a suggestion by a mentor named Tanmay Shah, he recruits and promotes a local sexologist named Dr. Vardhi, and tries to increase the awareness levels of sex-related issues in the country. Their business takes off as the product is very popular with Indian women and men alike.