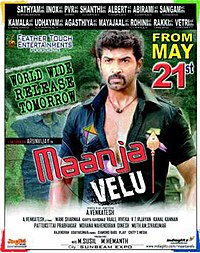 Maanja Velu is a 2010 Indian Tamil-language action film directed by A. Venkatesh. It stars Arun Vijay, Karthik, Prabhu and Dhansika in the lead with Vijayakumar and Riyaz Khan playing supporting roles and Santhanam and Ganja Karuppu providing comical relief. Most of the team from the successful venture, Malai Malai re-united for this film. It is a remake of the 2007 Telugu film Lakshyam. It has also been dubbed in Hindi as Zakhmi Cheetah. The film became a hit at the box office similar to the previous outing Malai Malai.

The film starts with a flashback. ACP Bose (Karthik) is a sincere police officer happily married. He lives with his parents and younger brother Velu (Arun Vijay). Velu is a college student, and he falls in love with his classmate Anjali (Dhansika). Enters Umapathi (Chandrasekar), the villain who is notorious for settlements and land deals. Anjali comes across Bose when she is on a field trip from her college with her friends. She gets friendly with his daughter Pinky, who tells her that she would get her introduced to her uncle Velu, and they would make a good pair. It turns out that Velu studies in Anjali's college and soon after, they come to know each other and get close.