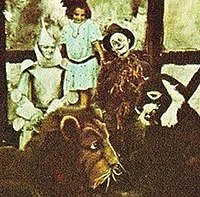 The Fairylogue and Radio-Plays 1908

The Fairylogue and Radio-Plays was an early attempt to bring L. Frank Baum's Oz books to the motion picture screen. It was a mixture of live actors, hand-tinted magic lantern slides, and film. Baum himself would appear as if he were giving a lecture, while he interacted with the characters (both on stage and on screen). Although acclaimed throughout its tour, the show experienced budgetary problems (with the show costing more to produce than the money that sold-out houses could bring in) and folded after two months of performances. It opened in Grand Rapids, Michigan on September 24, 1908. It then opened in Orchestra Hall in Chicago on October 1, toured the country and ended its run in New York City. There, it was scheduled to run through December 31, and ads for it continued to run in The New York Times until then, but it reportedly closed on December 16.