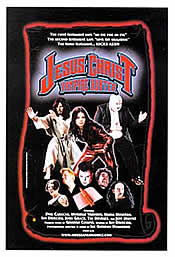 Jesus Christ Vampire Hunter is a 2001 Canadian horror parody film from Odessa Filmworks which deals with Jesus' modern-day struggle to protect the lesbians of Ottawa, Ontario, from vampires with the help of Mexican wrestler El Santo (based on El Santo, Enmascarado de Plata, and played by actor Jeff Moffet, who starred as El Santo in two other Odessa Filmworks productions).

After a spree of vampire attacks on lesbians, a Catholic priest (Father Eustace) realizes that only Jesus Christ can fight off the vampires. Eustace sends two priests to a beach, where they inform Jesus of the problem. Three vampires, including Maxine Shreck, kill the priests, but Jesus kills two of the vampires by using the lake as holy water. Maxine escapes. Jesus goes to Ottawa, gets a haircut, and buys wood to make stakes. Thirty atheists jump out of a car and confront Jesus, only to be easily defeated. Jesus teams up with Mary Magnum and infiltrates the hospital, where they discover that Dr. Praetorious is performing skin transplants to make the vampires immune to sunlight. Maxine and Johnny Golgotha defeat Jesus and Mary in a rooftop battle. Thus Mary is bitten, becoming a vampire.