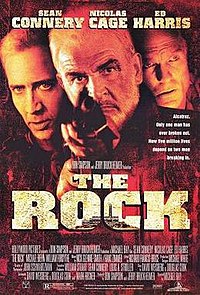 The Rock is a 1996 American action thriller film directed by Michael Bay, produced by Don Simpson and Jerry Bruckheimer, and written by David Weisberg and Douglas S. Cook. The film stars Sean Connery, Nicolas Cage and Ed Harris, with William Forsythe and Michael Biehn co-starring. It is dedicated to Simpson, who died five months before its release. The film received mixed reviews from critics, but it was nominated for Academy Award for Best Sound Mixing at the 69th Academy Awards, it earned box-office receipts of over $335million against a production budget of $75million, and was the fourth highest-grossing film of 1996.

A group of rogue U.S. Force Recon Marines, led by disenchanted Brigadier General Frank Hummel and his second-in-command Major Tom Baxter, storm a heavily guarded naval weapons depot and steal a stockpile of deadly VX gas-armed M55 rockets, losing one of their own men in the process. The next day, Hummel and his men, along with newly-recruited Marine Captains Frye and Darrow, seize control of Alcatraz Island, taking eighty-one tourists hostage. Hummel threatens to launch the rockets against San Francisco unless the U.S. government pays him $100 million from a military slush fund, which he will distribute to his men and the families of Recon Marines who died on clandestine missions under his command but whose deaths were not compensated.