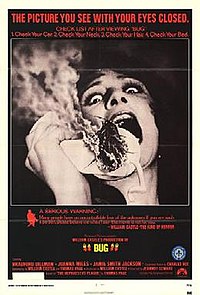 Bug is a 1975 American horror film in Panavision, directed by Jeannot Szwarc and written by William Castle and Thomas Page, from Page's novel The Hephaestus Plague (1973). It was the last film Castle was involved in before his death in 1977. The film starred Bradford Dillman, Joanna Miles and Richard Gilliland.

An earthquake releases a bunch of mutant cockroaches that can create fire by rubbing their cerci together. Eventually, most of the bugs die because they cannot survive in the low air pressure on the Earth's surface, but a scientist, Professor James Parmiter (Dillman), keeps one alive in a pressure chamber. He successfully breeds the mutant cockroach with a modern cockroach, creating a breed of intelligent, flying super-cockroaches.