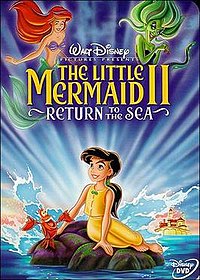 The Little Mermaid II: Return to the Sea 2000

The Little Mermaid II: Return to the Sea is a 2000 animated direct-to-video musical adventure film produced by Walt Disney Television Animation, and the second installment in The Little Mermaid film series. Directed by Jim Kammerud and Brian Smith, the story of the film takes place 12 years after the original, and focuses on Ariel and Eric's daughter Melody, a human princess who longs to swim in the ocean despite her parents' law that the sea is forbidden to her.

Ariel and Eric celebrate the birth of their newborn daughter Melody on a ship at sea with all the merfolk of Atlantica present. Ariel sings a lullaby to baby Melody expressing her love and how she hopes Melody’s heart will always belong to her and the sea because of her mermaid heritage. Ariel's father King Triton presents Melody with a magic locket with her name on it. The party is interrupted by Ursula's younger sister Morgana, who threatens to have Melody fed to her pet tiger shark, Undertow, unless Triton surrenders his trident to her. Morgana then announces her plan to use the trident to avenge Ursula and take over the ocean. Ariel and Eric work together to foil Morgana's plan, and Triton shrinks Undertow to the size of a piranha. Morgana escapes, eluding the attempts of King Triton's forces to capture her and declaring that she will someday exact her revenge on both Ariel and Triton and avenge Ursula's death.