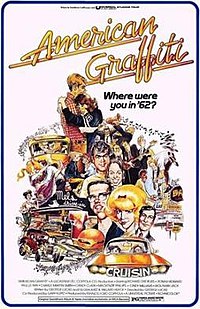 On their last evening of summer vacation in 1962, high school graduates and friends Curt Henderson and Steve Bolander meet two other friends, John Milner, the drag-racing king, and Terry "The Toad" Fields, in the parking lot of Mel's Drive-In in Modesto, California. Curt and Steve are to travel "Back East" the following morning to start college. Curt has second thoughts about leaving Modesto. Steve gives Terry his car to care for until he returns. Laurie, Steve's girlfriend and Curt's sister, arrives. Steve suggests to Laurie that they see other people while he is away to "strengthen" their relationship. Though not openly upset, she is, affecting their interactions through the night.