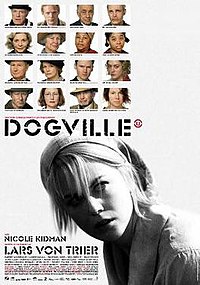 Dogville is a 2003 avant-garde crime tragedy film written and directed by Lars von Trier, and starring an ensemble cast led by Nicole Kidman, Lauren Bacall, Paul Bettany, Chloë Sevigny, Stellan Skarsgård, Udo Kier, Ben Gazzara, Harriet Andersson, and James Caan. It is a parable that uses an extremely minimal, stage-like set to tell the story of Grace Mulligan (Kidman), a woman hiding from mobsters, who arrives in the small mountain town of Dogville, Colorado, and is provided refuge in return for physical labor.

The story of Dogville is told in nine chapters and a prologue, with a one-sentence description of each chapter given in the film, in the vein of such chapter headings in many 19th-century novels. These descriptions are given below.