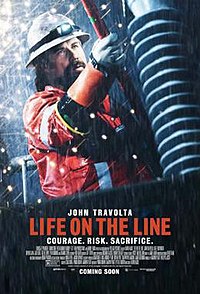 Life on the Line is a 2015 American direct-to-video disaster thriller film directed by David Hackl and written by Primo Brown, Marvin Peart and Peter I. Horton. The film stars John Travolta, Kate Bosworth, Devon Sawa, Gil Bellows, Julie Benz, Ryan Robbins and Sharon Stone. The film was released on November 18, 2016, by Lionsgate Premiere. The film follows a crew of high-wire workers fixing the electric grid but eventually they are hit by a deadly storm and need to survive.

The film opens with a man named Duncan (Devon Sawa), giving an interview for a documentary. He gets asked what it is like for him to be a lineman. He is also asked to tell about "the storm." He gets a little visibly shaken and takes a breath.