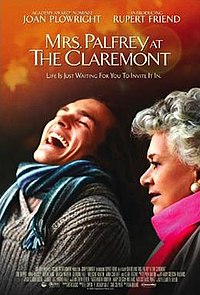 Mrs. Palfrey at the Claremont 2005

Mrs. Palfrey at the Claremont is a 2005 US-produced comedy-drama film based on the 1971 novel by Elizabeth Taylor. It was directed by Dan Ireland and produced by Lee Caplin, Carl Colpaert and Zachary Matz from a screenplay by Ruth Sacks Caplin.

All but abandoned by her family in a London retirement hotel, Mrs Palfrey (Joan Plowright) strikes up a curious friendship with a young writer, Ludovic Meyer (Rupert Friend). Fate brings them together after she has an accident outside his basement flat. The two newly found friends discover they have a lot more in common with each other than they do with other people their own age. Ludovic inadvertently leads Mrs. Palfrey through her past; Mrs. Palfrey inadvertently leads Ludovic to his future.