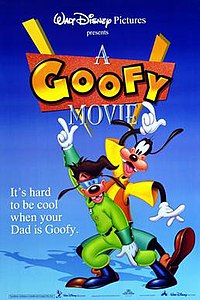 A Goofy Movie is a 1995 American animated musical comedy film produced by Disney MovieToons and Walt Disney Television Animation. The animated directorial debut of Kevin Lima, the film is based on The Disney Afternoon television series Goof Troop created by Robert Taylor and Michael Peraza Jr., and serves as a standalone follow-up to the show. It features the voices of Jason Marsden, Bill Farmer, Jim Cummings, Kellie Martin, Pauly Shore, Jenna von Oÿ, and Wallace Shawn. The film was also dedicated to Pat Buttram, who died during the film's production. Taking place a few years after the events of Goof Troop, A Goofy Movie follows Goofy and his son, Max, who is now in high school, and revolves around the father-son relationship between the two as Goofy embarks on a misguided mission to bond with his son by taking him on a cross-country fishing trip, impeding Max's social life by taking him away from his friends, in particular his high school crush Roxanne.

Goofy is the single father of his 14-year-old son Max Goof, although the two have a tense relationship. On the last day of school before summer vacation, Max and his best friends P.J. and Robert "Bobby" Zimuruski hijack the auditorium in the middle of Principal Mazur's speech, creating a small concert where Max performs, while dressed as the pop singer Powerline. The performance succeeds in making Max a school celebrity and impressing his love interest, Roxanne, but he, P.J., and Bobby are sent to Mazur's office. While waiting outside of the office, Roxanne speaks with Max and agrees to go with him to a party where Powerline's concert will be viewed live on television. However, Mazur calls Goofy and forewarns him that Max's behavior may result in him facing capital punishment.