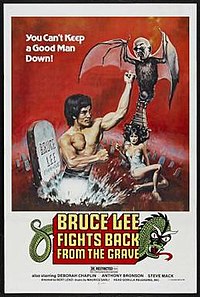 Bruce Lee Fights Back from the Grave 1976

Bruce Lee Fights Back from the Grave, originally released as Visitor of America, is a 1976 Bruceploitation supernatural martial arts film starring tae kwon do instructor Jun Chong (credited as 케리・郑 Ke-li Chong in the original South Korean version and as Bruce K. L. Lea in the English-dubbed and altered U.S. edit). The film was directed by Lee Doo-yong, though persistent misinformation claims that the movie was directed by Italian horror director Umberto Lenzi. The poster's artwork was very common among exploitation films at the time.

The opening sequence (which was filmed separately and added to the original South Korean film when the film was dubbed into English) shows Bruce Lee (played by an unknown imitator), leaping from his grave after it is struck by lightning. While this and the title imply a story involving Bruce Lee returning from the afterlife in order to do battle, the rest of the movie revolves around a plot that has nothing to do with Bruce Lee. Instead, it talks about a certain Wong Han, a Korean man trying to discover the truth behind the death of his brother, Han Ji-Hyeok. He travels to Los Angeles and allies himself with a woman named Suzanne. Han is harassed by a number of petty criminals and thugs in his attempt to find out the truth about his brother. Eventually, he begins to suspect that Ji-Hyeok is still alive and involved in a criminal racket.