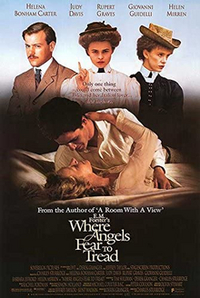 Where Angels Fear to Tread 1991

Where Angels Fear to Tread is a 1991 British drama film directed by Charles Sturridge and starring Helena Bonham Carter, Judy Davis, Rupert Graves, Giovanni Guidelli, Barbara Jefford, and Helen Mirren. The screenplay by Sturridge, Tim Sullivan, and Derek Granger is based on the 1905 novel of the same name by E. M. Forster.

Recently widowed and anxious to escape the clutches of her oppressively meddlesome in-laws, free-spirited Lilia Herriton, née Theobald (Helen Mirren) travels to the hillside Tuscan town of Monteriano with her young friend Caroline Abbott (Helena Bonham Carter). There she falls in love with both the countryside and Gino Carella, a handsome young villager, and she decides to stay. Appalled by her behaviour and concerned about Lilia's future, Mrs. Herriton, Lilia's strait-laced mother-in-law, dispatches her own son Philip (Rupert Graves) to Italy to persuade her to return home, but by the time he arrives Lilia and Gino have wed. He and Caroline return home, unable to forgive themselves for not putting an end to what they see as a clearly unsuitable marriage.