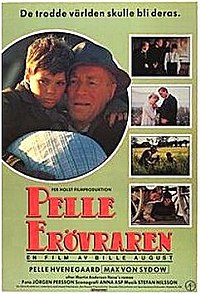 Pelle the Conqueror (, ) is a 1987 epic film co-written and directed by Bille August, based upon the noted 1910 novel of the same name by Danish writer Martin Andersen Nexø. The film tells the story of two Swedish immigrants to Denmark, a father and son, who try to build a new life for themselves. It stars Pelle Hvenegaard as the young Pelle, with Max von Sydow as his father, and also features Axel Strøbye and Astrid Villaume.

In the late 1850s, the elderly emigrant Lasse Karlsson and his son Pelle reach the Danish island of Bornholm after having left Skåne County, in southern Sweden, following the death of the boy's mother. Lasse finds it difficult to find work, given his advanced age and Pelle's youth. They are forced to work at a large farm, where they are generally mistreated by the managers.