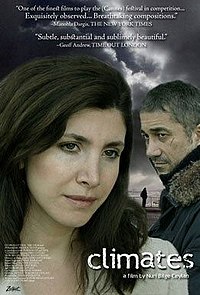 Climates is a 2006 Turkish drama film directed by Nuri Bilge Ceylan. The film charts the deteriorating relationship between a professional Istanbul couple, İsa and Bahar, played by Ceylan and his wife Ebru Ceylan. It was Ceylan's first film shot on High-definition video.

The film starts on a summer holiday in Kaş, where the couple are barely talking. İsa is taking pictures of ancient monuments for a perpetually unfinished thesis for the university class he teaches; Bahar watches. At the beach she falls asleep and dreams that he is smothering her in sand. After rehearsing his speech while Bahar is swimming, Isa tells her that he wants to break up. While riding back to the city on a motorbike she suddenly covers his eyes with her hands, which causes the bike to crash, although both of them avoid serious injury. The couple go their separate ways and Bahar tells him not to call.