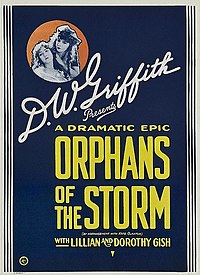 Orphans of the Storm is a 1921 silent drama film by D. W. Griffith set in late-18th-century France, before and during the French Revolution.

Just before the French Revolution, Henriette takes her close adopted sister Louise to Paris in the hope of finding a cure for her blindness. She promises Louise that she will not marry until Louise can look upon her husband to approve him. Lustful aristocrat de Praille (whose carriage kills a child, enraging peasant father, Forget-not) meets the two outside Paris. Taken by the virginal Henriette's beauty, he has her abducted and brought to his estate where a lavish party is being held, leaving Louise helpless in the big city. An honorable aristocrat, the Chevalier de Vaudrey helps Henriette to escape de Praille and his guests by successfully fighting a duel with him. The scoundrel Mother Frochard, seeing an opportunity to make money, tricks Louise into her underground house to be kept prisoner. Unable to find Louise with the help of the Chevalier, Henriette rents a room, but before leaving her de Vaudrey comforts and kisses the distressed woman. Later, Henriette gives shelter to admirable politician Danton, who after an attack by Royalist spies following a public speech falls for her. As a result, she runs foul of the radical revolutionary Robespierre, a friend of Danton.