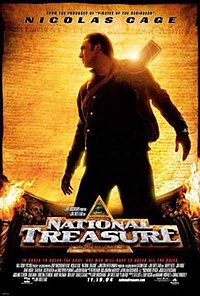 National Treasure is a 2004 American action-adventure film released by Walt Disney Pictures. It was written by Jim Kouf and the Wibberleys, produced by Jerry Bruckheimer and directed by Jon Turteltaub. It is the first film in the National Treasure film series and stars Nicolas Cage, Harvey Keitel, Jon Voight, Diane Kruger, Sean Bean, Justin Bartha, and Christopher Plummer.

In 1974, John Adams Gates tells his grandson, Benjamin Franklin Gates, a story in which Charles Carroll of Carrollton passed on a secret to their ancestor, Thomas Gates, in 1832 of a fabled treasure taken from ancient empires throughout history that was discovered by the Knights Templar and later protected by the Freemasons. The treasure would eventually be hidden in America by the Founding Fathers. The clue leading to the treasure is the phrase "The secret lies with Charlotte." While Ben is convinced by the story, his skeptical father, Patrick, dismisses it as nonsense.