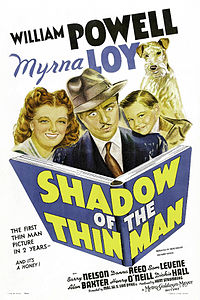 Shadow of the Thin Man is the fourth of six The Thin Man murder mystery comedy films. It was released by MGM in 1941 and was directed by W. S. Van Dyke. It stars William Powell and Myrna Loy as Nick and Nora Charles. Also, in this film their son Nick Jr. (Dickie Hall) is old enough to figure in the comic subplot. Other cast members include Donna Reed and Barry Nelson. This was one of three films in which Stella Adler appeared.

Nick and Nora Charles are looking forward to a relaxing day at a racetrack, but when a jockey accused of throwing a race is found shot to death, Police Lieutenant Abrams requests Nick's help. The trail leads to a gambling syndicate that operates out of a wrestling arena, a murdered reporter, and a pretty secretary whose boyfriend has been framed. Along the way, Nick and Nora must contend with a wild wrestling match, a dizzying day at a merry-go-round (accompanied by Nick, Jr.), and a table-clearing restaurant brawl.