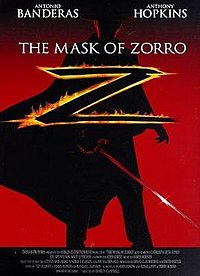 The Mask of Zorro is a 1998 American swashbuckler film based on the character of the masked vigilante Zorro created by Johnston McCulley. It was directed by Martin Campbell and stars Antonio Banderas, Anthony Hopkins, Catherine Zeta-Jones, and Stuart Wilson. The film features the original Zorro, Don Diego de la Vega (Hopkins), escaping from prison to find his long-lost daughter (Zeta-Jones) and avenge the death of his wife at the hands of the corrupt governor Rafael Montero (Wilson). He is aided by his successor (Banderas), who is pursuing his own vendetta against the governor's right-hand man while falling in love with de la Vega's daughter.

In 1821, Don Diego de la Vega, a Spanish-born California nobleman, fights against the Spanish in the Mexican War of Independence as Zorro, a mysterious masked swordsman who defends the Mexican peasants and commoners of Las Californias. Don Rafael Montero, the corrupt governor of the region, sets a trap for Zorro at a public execution of three innocent peasants. Zorro stops the execution, and Montero's soldiers are thwarted by two young brothers, Alejandro and Joaquin Murrieta. Zorro fights the remaining Spanish soldiers and thanks the Murrieta brothers by giving Joaquin a silver medallion. Don Montero suspects de la Vega of being Zorro and attempts to arrest him at his home. A swordfight begins, a fire breaks out, and de la Vega's wife Esperanza, whom Montero held unrequited love for, is shot and killed during the ensuing scuffle. While Diego's home burns, Montero takes his infant daughter, Elena, as his own before sending de la Vega to prison and returning to Spain.