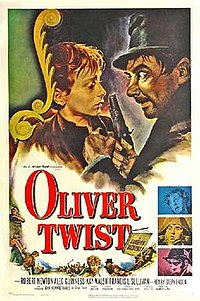 Oliver Twist is a 1948 British film and the second of David Lean's two film adaptations of Charles Dickens novels. Following the success of his 1946 version of Great Expectations, Lean re-assembled much of the same team for his adaptation of Dickens' 1838 novel, including producers Ronald Neame and Anthony Havelock-Allan, cinematographer Guy Green, designer John Bryan and editor Jack Harris. Lean's then-wife, Kay Walsh, who had collaborated on the screenplay for Great Expectations, played the role of Nancy. John Howard Davies was cast as Oliver, while Alec Guinness portrayed Fagin and Robert Newton played Bill Sykes (Bill Sikes in the novel).

A young woman in labour makes her way to a parish workhouse and dies after giving birth to a boy, who is systematically named Oliver Twist (John Howard Davies) by the workhouse authorities. As the years go by, Oliver and the rest of the child inmates suffer from the callous indifference of the officials in charge: beadle Mr. Bumble (Francis L. Sullivan) and matron Mrs. Corney (Mary Clare). At the age of nine, the hungry children draw straws; Oliver loses and has to ask for a second helping of gruel ("Please sir, I want some more").