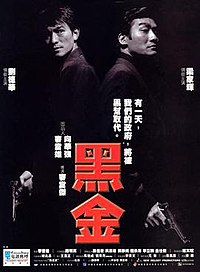 Island of Greed is a 1997 Hong Kong action crime thriller film directed by Michael Mak and starring Andy Lau and Tony Leung Ka-fai. The film is set and filmed in Taiwan and deals with corruption in the Government of the Republic of China.

While investigating in Taiwan's gambling arcade scene, Captain Fong Kwok-fai (Andy Lau) of the Ministry of Justice Investigation Bureau's Tactical Squad discovers the mastermind to be Chow Chiu-sin (Tony Leung Ka-fai) leader of the Chung-lam Triad, who had decided to run as a member of the Legislative Yuan and bribes his way into office. Fong infiltrate one his arcades and prosecutes him for operating an underground casino, but Chow has bribed the presiding judge and is squirted. Fong then convinces Chairman Lam Ching-piu of Tak-cheong Construction Company, who has reported Chow for blackmailing him, to record evidence of Chow in bid rigging for the construction of Coastal Highway. Chow catches Lam and drags him on a fishing hook through a plantation and Fong and his squad give chase while evading Chow's attack dogs and manage to rescue Lam. Fong exposes Chow to the public, so the Kuomintang decides to nominate his rival, Ting Chung-shu, to run for the Legislative Yuan instead. Angered, Chow matches into Ting's press conference to announce that he is running for the Legislative Yuan with a political party. At this time, Fong is also suspended from his duties as his superior officer, Suen Ching-lim, is also corrupt.