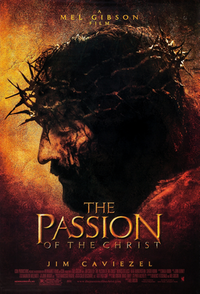 The Passion of the Christ 2004

The Passion of the Christ is a 2004 American biblical drama film produced, co-written and directed by Mel Gibson and starring Jim Caviezel as Jesus of Nazareth, Maia Morgenstern as the Virgin Mary, and Monica Bellucci as Mary Magdalene. It depicts the Passion of Jesus largely according to the gospels of Matthew, Mark, Luke and John. It also draws on pious accounts such as the Friday of Sorrows along with other devotional writings, such as the reputed Marian apparitions attributed to Anne Catherine Emmerich.

In the late hours of the night at the forested garden of Gethsemane, at the height of his cause, Jesus prays while his disciples Saint Peter, James, son of Zebedee James, and John the Evangelist sleep. While he prays in seclusion, Satan appears to Jesus in an androgynous form, and tempts him, stating that no one can bear the burden that God asks of him: to suffer and die for humanity's sins. Jesus' sweat turns into blood and drips to the ground while a serpent emerges from Satan's guise. Jesus hears his disciples call for him, and rebukes Satan by crushing the snake's head.