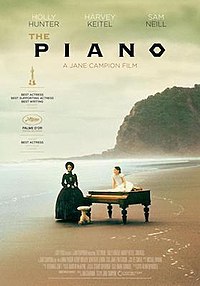 In the mid-1800s, an electively mute Scotswoman named Ada McGrath is sold by her father into marriage to a New Zealand frontiersman named Alisdair Stewart, bringing her young daughter Flora with her. Ada has not spoken a word since she was six and no one, including herself, knows why. She expresses herself through her piano playing and through sign language, for which her daughter, in parent-child role reversal, has served as her interpreter. Flora is the product of a relationship with a piano teacher whom Ada believed she had seduced through mental telepathy, but who "became frightened and stopped listening" and thus left her.