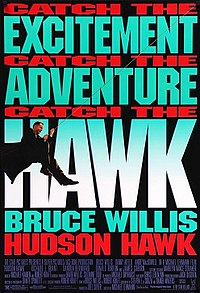 Eddie Hawkins—"Hudson Hawk" (from the bracing winds off the Hudson)—is a master cat burglar and safe-cracker with a penchant for using low-tech solutions against high-tech security systems and for conducting his robberies with precise, synchronized timing (later revealed to be a robust catalog of memorized music that he and his partner(s) sing along with during jobs). Upon his release and his first day of parole, he and his former partner, Tommy "Five-Tone" Messina, seek out a good cup of cappuccino; however, before he gets it, he is blackmailed by various entities, including his parole officer, the minor Mario Brothers Mafia family, and the CIA, into doing a few art heists. Hawk refuses each except with mounting pressure and coercion, stating that his only real desires are to remain out of prison and enjoy a good cup of cappuccino -- though he is repeatedly interrupted before doing so. Hawk eventually relents and proceeds to case the art pieces.