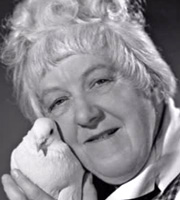 A writer named Wrigley (Richard Hearne) creates a comic strip character named Miss Robin Hood for a children's story paper. It is a modernized retelling of the Robin Hood legend in which the heroine robs banks with the assistance of a gang of teenage girls and then redistributes the money.