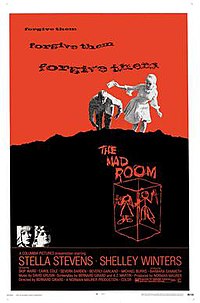 The Mad Room is a 1969 American horror and drama film directed by Bernard Girard, and starring Stella Stevens, Shelley Winters, Skip Ward, Carole Cole, Severn Darden, Beverly Garland, Michael Burns, and Barbara Sammeth. It is a loose remake of the 1941 film Ladies in Retirement, which had been adapted from a 1940 play of the same title written by Reginald Denham and Edward Percy.

Ellen Hardy, working as a live-in assistant to wealthy widow Mrs. Armstrong, gets a call from the mental institution where her younger brother George and sister Mandy have been living since they were accused of killing their parents when they were six and four years old. George is turning 18, and rather than send him and Mandy to an adult facility, Ellen takes them back to live with her in Mrs. Armstrong's large house. Afraid of what their reception would be if the others knew the truth, Ellen conceals their dangerous history.