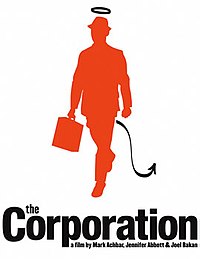 The Corporation is a 2003 Canadian documentary film written by University of British Columbia law professor Joel Bakan, and directed by Mark Achbar and Jennifer Abbott. The documentary examines the modern-day corporation. Bakan wrote the book, The Corporation: The Pathological Pursuit of Profit and Power, during the filming of the documentary.