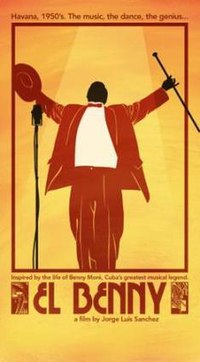 El Benny is a Cuban film released in 2006, directed and co-written by Jorge Luis Sánchez, his first feature-length film. It is a fictional story based on the life of the famous Cuban musician Benny Moré. It includes new versions of his songs performed by musicians including Chucho Valdés, Juan Formell, Haila and Orishas.