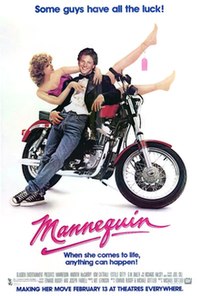 Mannequin is a 1987 American romantic comedy film directed by Michael Gottlieb and written by Edward Rugoff and Gottlieb. It stars Andrew McCarthy, Kim Cattrall, Estelle Getty, and G. W. Bailey. The original music score was composed by Sylvester Levay. A modern retelling of the Pygmalion myth, the film revolves around a chronically underemployed artist named Jonathan Switcher (McCarthy) who lands a job as a department-store window dresser and falls in love with a mannequin (Cattrall)—the attraction being that she comes to life on occasion, but only for him.

In Ancient Egypt, Ema "Emmy" Hesire hides in a pyramid from her mother, who wants an arranged marriage. Emmy prays to the gods to save her and find her true love in the future. The gods answer her prayers and Emmy suddenly vanishes before her mother's eyes. In 1987, Philadelphia artist Jonathan Switcher takes a number of odd jobs, including one where he assembles a beautiful, perfect mannequin. Although Jonathan painstakingly expresses his artistic passion, his employers dismiss him for taking too much time or deviating from a set pattern. His arrogant girlfriend Roxie Shield, who views Jonathan as a flake, dumps him.