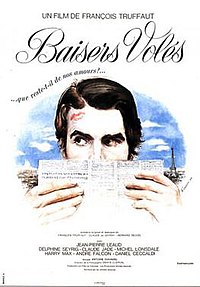 Stolen Kisses is a 1968 French romantic comedy-drama film directed by François Truffaut, starring Jean-Pierre Léaud, Delphine Seyrig and Claude Jade. It continues the story of the character Antoine Doinel, whom Truffaut had previously depicted in The 400 Blows (1959) and the short film Antoine and Colette (1962). In this film, Antoine begins his relationship with Christine Darbon, which is depicted further in the last two films in the series, Bed & Board (1970) and Love on the Run (1979).

There are many continuations from The 400 Blows; discharged from the army as unfit, Antoine Doinel seeks out his sweetheart, violinist Christine Darbon. He has written to her voluminously (but, she says, not always nicely) while in the military. Their relationship is tentative and unresolved. Christine is away skiing with friends when Antoine arrives, and her parents must entertain him themselves, though glad to see him. After she learns that Antoine has returned from military service, Christine goes to greet him at his new job as a hotel night clerk. It is a promising sign that perhaps this time, the romance will turn out happily for Antoine. He is, however, quickly fired from the hotel job. Counting the army, Antoine loses three jobs in the film, and is clearly destined to lose a fourth, all symbolic of his general difficulty with finding his identity and "fitting in".