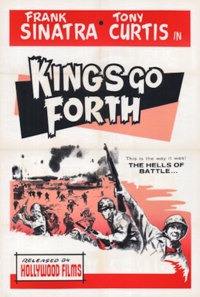 Kings Go Forth is a 1958 black-and-white World War II film starring Frank Sinatra, Tony Curtis, and Natalie Wood. The screenplay was written by Merle Miller from the 1956 novel of the same name by Joe David Brown, and the film was directed by Delmer Daves. The plot involves friends of different backgrounds manning an observation post in Southern France who fall in love with the same French girl. She proves to be of American Mulatto ancestry. Themes of racism and miscegenation provide the conflict elements between the leading characters, something that was out of the ordinary for films of the time, while the setting during the so-called Champagne Campaign remains unique.

In the final year of World War II, units of the United States Army are in the foothills of the Alps between France and Italy, trying to dislodge a unit of German soldiers from a supply post in the middle of a small village. 1st Lt. Sam Loggins (Frank Sinatra) is in charge of an artillery observation unit that has just lost its radioman. A truckload of fresh young soldiers arrive, one of whom, Corporal Britt Harris (Tony Curtis) admits to radio training and experience—Harris is immediately appointed the unit's radioman by Loggins.