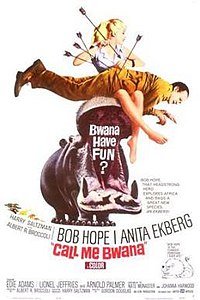 Call Me Bwana is a 1963 British Technicolor farce film starring Bob Hope and Anita Ekberg, and directed by Gordon Douglas.

Bob Hope plays Matt Merriwether, a New York writer who has passed off his uncle's memoirs of explorations in Africa as his own. Merriwether lives his false reputation as a great white hunter to the point of living in a Manhattan apartment furnished to look like an African safari lodge complete with sound effects records of African fauna. Based on his false reputation as an "Africa Expert", he is recruited by the United States Government and NASA to locate a missing secret space probe before it can be located by hostile forces.