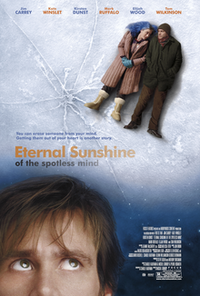 Eternal Sunshine of the Spotless Mind 2004

Eternal Sunshine of the Spotless Mind is a 2004 American science fiction romantic drama film written by Charlie Kaufman and directed by Michel Gondry. It follows an estranged couple who have erased each other from their memories. Pierre Bismuth created the story with Kaufman and Gondry. The ensemble cast includes Jim Carrey, Kate Winslet, Kirsten Dunst, Mark Ruffalo, Elijah Wood, and Tom Wilkinson. The title of the film is a quotation from the 1717 poem Eloisa to Abelard by Alexander Pope.

Shy, soft-spoken Joel Barish and unrestrained free spirit Clementine Kruczynski meet on a Long Island Rail Road train from Montauk to Rockville Centre. Both had felt the need to travel to Montauk that day, and they almost immediately connect, feeling drawn to each other despite their contrasting personalities. They agree to a second date, during which Clementine takes them to the frozen Charles River in Boston. Although Joel and Clementine do not realize it, they were once in a relationship, having separated after dating for two years. After a fight, Clementine had hired the New York City firm Lacuna, Inc. to erase all her memories of their relationship. Upon discovering this from his friends Rob and Carrie, Joel decides to undergo the procedure himself. Directly before this, he buys Clementine a necklace from an antique store and goes to her work to give it to her. Clementine does not recognize him and Joel sees her kissing a younger guy named Patrick.