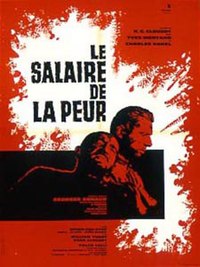 The Wages of Fear is a 1953 French thriller film directed by Henri-Georges Clouzot, starring Yves Montand, and based on the 1950 French novel Le Salaire de la peur (lit. "The Salary of Fear") by Georges Arnaud. When an oil well owned by an American company catches fire, the company hires four European men, down on their luck, to drive two trucks over mountain dirt roads, loaded with nitroglycerine needed to extinguish the flames.

Frenchmen Mario and Jo, German Bimba and Italian Luigi are stuck in the isolated town of Las Piedras. Surrounded by desert, the town is linked to the outside world only by an airstrip, but the airfare is beyond the means of the men. There is little opportunity for employment aside from the American corporation that dominates the town, Southern Oil Company (SOC), which operates the nearby oil fields and owns a walled compound within the town. SOC is suspected of unethical practices such as exploiting local workers and taking the law into its own hands, but the townspeople's dependence upon it is such that they suffer in silence.