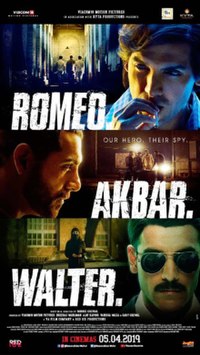 Romeo Akbar Walter is a 2019 Indian Hindi-language action thriller film written and directed by Robbie Grewal. It stars John Abraham, Mouni Roy, Jackie Shroff and Sikandar Kher. Initially, Sushant Singh Rajput was to star in the film as the protagonist but opted out of it due to his prior commitments. The narrative centers around a banker who is recruited as a spy for an undercover operation in Pakistan, where he faces both physical and emotional challenges. The film was theatrically released on 5 April 2019.

In November 1971 at ISI detention cell, Karachi, a man is being given a 3rd degree torture. The movie then goes 9 months back.