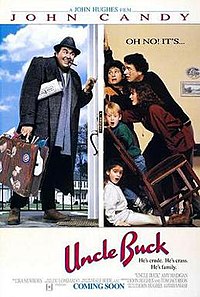 Uncle Buck is a 1989 American comedy film directed by John Hughes and written by Hughes.

Bob and Cindy Russell and their three children, 15-year-old Tia, 8-year-old Miles, and 6-year-old Maizy, have recently moved from Indianapolis to the Chicago suburbs due to Bob's promotion. Tia is always moody, being especially condescending towards her mother.