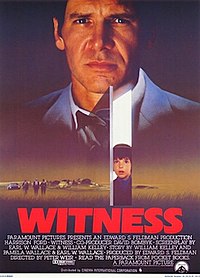 In 1984, an Amish community outside Lancaster, Pennsylvania, attends the funeral of Jacob Lapp, who leaves behind his wife Rachel and eight-year-old son Samuel. Rachel and Samuel travel by train to visit Rachel's sister, which takes them into Philadelphia. While at 30th Street Station waiting for a connecting train, Samuel goes into the men's room and witnesses the brutal murder of an undercover police officer.