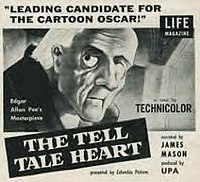 The Tell-Tale Heart is a 1953 American animated psychological horror short film produced by UPA, directed by Ted Parmelee, and narrated by James Mason. The screenplay by Bill Scott and Fred Grable is based on the 1843 short story of the same name by Edgar Allan Poe. The British Board of Film Censors made this the first cartoon to receive an adults-only X certificate in the United Kingdom.