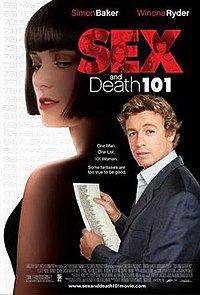 Sex and Death 101 is a 2007 dark comedy science fiction film written and directed by Daniel Waters, released in the United States on April 4, 2008. The film marks the reunion of writer director Daniel Waters and Winona Ryder, who previously worked on the film of 1988, Heathers, written by Waters.

Roderick Blank (Simon Baker) is a successful young businessman with a great job as an executive for "Swallows", a high end fast food restaurant chain, and a beautiful fiancée, Fiona Wormwood (Julie Bowen). On the day of his bachelor party, he is emailed a list of all the women he has slept with. Strangely, while the list has 101 names, his fiancée is only number 29.