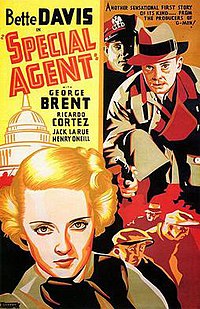 Special Agent is a 1935 American drama film directed by William Keighley and starring Bette Davis and George Brent. The screenplay by Laird Doyle and Abem Finkel is based on a story by Martin Mooney. The film was produced by Cosmopolitan Productions and released by Warner Bros.

The Federal Government seeks to imprison gangsters due to their financial crimes, tax evasion and violations of Internal Revenue Service regulations. Newspaper reporter Bill Bradford is deputized as a treasury agent by the Internal Revenue Bureau and assigned to find enough evidence to charge gangster Alexander Carston (who has the same initials as Al Capone) with tax evasion.