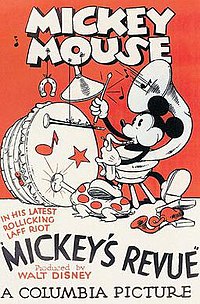 Mickey's Revue is a 1932 Walt Disney cartoon, directed by Wilfred Jackson, which features Mickey Mouse, Minnie Mouse, Horace Horsecollar and Clarabelle Cow performing a song and dance show. The film was delivered to Columbia Pictures on May 12 and it was released on May 27, 1932. It was the 41st Mickey Mouse film, the fifth of that year, and the cartoon Goofy debuted in.

In a barnyard concert hall, Mickey Mouse is the conductor for a band of pigs and horses. In a ballet sequence, Minnie Mouse is a flying fairy, held aloft by Horace Horsecollar. Several dancing cows also feature in the performance, and Pluto makes an occasional appearance. In the audience, a witless yokel character annoys the audience by crunching a bag of peanuts and laughing loudly. A pair of tap dancing hounds perform. The yokel laughs again, and other audience members knock him out with a mallet. Mickey and Minnie round out the performance with a duet for piano and horns, assisted by a mischievous litter of kittens.