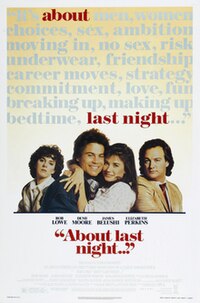 About Last Night (styled as "About Last Night...") is a 1986 American romantic comedy-drama film directed by Edward Zwick, and starring Rob Lowe and Demi Moore as Chicago yuppies who enter a committed relationship for the first time. The screenplay by Tim Kazurinsky and Denise DeClue is based on the 1974 David Mamet play Sexual Perversity in Chicago. The film received positive reviews. It was remade as the 2014 About Last Night (without the ellipsis).

The movie begins in Chicago with two 20-something friends and colleagues, Dan Martin and Bernie Litko, discussing their outlandish sexual escapades. Later on, Bernie and Dan's recreational softball team, sponsored by local bar “Mother’s,” plays against a local advertising agency and wins. Attending this game with her girlfriends is Debbie Sullivan, who works at the advertising company and is sleeping with her boss, Steve. Debbie catches Dan's eye and the two flirt at a beer keg. Debbie and her friends, Joan and Pat, decide to attend the game's afterparty at Mother's, where Debbie again runs into Dan, with whom Pat attempts to flirt and Joan takes an immediate dislike to. They wind up back at Dan's apartment and sleep together, after which Debbie hastily leaves.