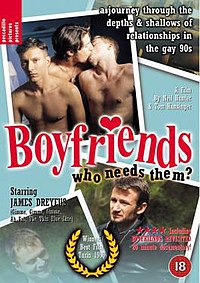 Boyfriends is a 1996 British independent film. Three gay couples, all of whom are suffering relationship problems, spend a weekend at the seaside and learn how to deal with their issues from each other. The film was written and directed by Tom Hunsinger and Neil Hunter. The film was James Dreyfus' last role as an unknown before taking the part of Constable Goody in The Thin Blue Line. The film also starred Mark Sands, Michael Urwin, Andrew Ableson, David Coffey, Darren Petrucci and Michael McGrath.

Paul, Matt and Will, three best friends decide to go on holiday together. Paul (James Dreyfus) brings his lover Ben, but their five-year relationship is unstable owing to Paul's continued moodiness over the death of his brother Mark; Matt brings Owen, with whom he wants a lifelong relationship but whose boisterous personality doesn't suit him; and Will brings Adam, a 20-year-old one-night stand. Mark's lover also comes along for some sense of closure.